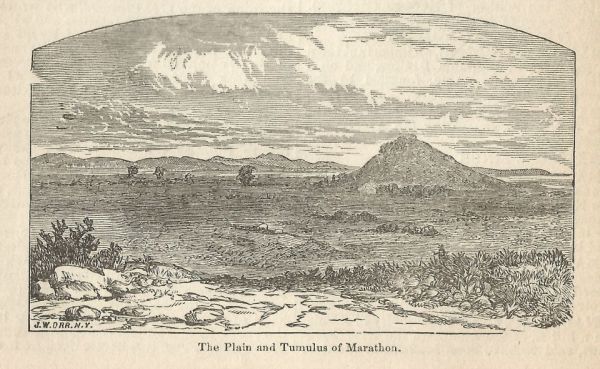 According to Smith, this picture shows Marathon, a village within Attica, located by a bay on Greece’s East coast (Smith). This village was approximately 26 miles from the city-state of Athens when traveling by the shortest route. Marathon stood on top of a plain, extending along the sea’s shoreline. The entire area designated as a part of this village fit the following measurements: “6 miles in length, and from 3 miles to 1.5 miles in breadth” (Smith). The village was also surrounded on three sides by rocky hills as well as two marshes located on the edges of the plain. The village of Marathon is known as the site for the “Battle of Marathon”, one of the major battles between the Athenians and Persians in 490 B.C.E. The Persians moved up the plain as the Athenians fought on the higher ground.  Some of the Athenians fell in battle on the tumulus, which is the hill within this picture that is also still present today (Smith).

The Causes Behind Marathon

According to Herodotus, there are several possible reasons for the Persian campaign against the Greeks. The first reason for this campaign is due to the Persians seeking revenge against the destruction of their sanctuary at Sardes. Sardes was one of the major sites of the Persian Empire, captured and ravished by the Athenians in the 5th century. Therefore, Herodotus thought the attack could have been one of vengeance. Also, the Persians longed to expand their empire, primarily by attacking the Greek islands. Since Marathon is along the coast and located near the islands, this village was a convenient spot for a Persian attack (Herodotus). 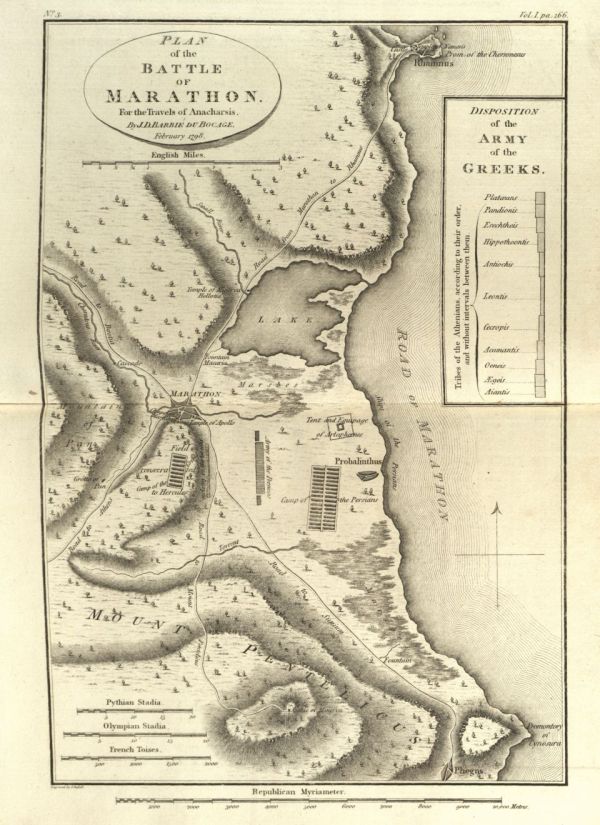 Marathon is known as the historical setting for the Battle of Marathon. According to Martin, the Persians were expected to win the battle at Marathon against the Athenians, for this battle marked the first time that the Athenians and Plataeans would meet the Persian forces (Martin). At this battle, the Greek soldiers were frightened by the outlandish looks of their invaders, who wore frightening and unfamiliar outfits. However, the Athenian generals, composed of a board of ten men elected on an annual basis as the leaders of Athens in regards to civil and military campaigns, refused to allow their men to give up hope. This team of generals, led by an aristocrat names Miltiades, devised a tactic that would minimize the Greek soldier’s exposure to the Persian fire archers. This plan involved a charging of the hoplites across Marathon’s plain against the Persian defenses. As the Greeks ran across the plain, their “metal armor clanked across the open space between the two armies under a hail of Persian arrows fired like an artillery barrage” (Martin). However, as the two armies met in hand-to-hand combat, the Greeks obtained the advantage in having more advanced, protective armor as well as longer weapons, allowing them to probe their enemies while being at an unreachable distance. The Greeks then drove the Persians into a nearby swamp, where all those who were unable to escape to the ships along the coast “could be picked off at the attackers’ leisure” (Martin). As the battle came to an end, an Athenian messenger ran approximately 26.2 miles from this village to Athens in order to tell of the Greek victory as well as advise the Athenians within this city-state to guard themselves against a coming naval attack by the Persian fleet; the invaders could potentially try to take Athens by approaching from the coast. However, the Persians sailed home without attempting to take this city causing the Greeks to rejoice in their unlikely victory. Therefore, in the coming decades, many Athenian men were honored for fighting in the Battle of Marathon, for they conquered those who were considered invincible, forcing them to retreat. In addition, we still commemorate this great feat through today’s marathon races, “whose name and distance are derived from this run in 490 B.C.E.” (Martin)

Anacharsis’ writings present a more in-depth analysis of the army formation at the Battle of Marathon. He writes about the relative positions of the tribes such as “it appears from the particulars of the battle, that the tribe Aïantis occupied the right wing, but it is not easy to determine the station of the other tribes” (Anacharsis, Maps 50). He then uses the marble of Choiseul, which describes this epic scene, in order to determine the arrangement of the remaining formation. The marble places “the tribe Aïantis on the right of the army, the tribes Leontis and Antiochis, according to the place they occupy in this marble, will naturally be placed in the centre” (Anacharsis, Maps 51). Therefore, this ancient writer used the scenes depicted on this marble to construct the Greek’s battle formation.

Anacharsis also supports the description presented by Smith on the location of both armies before the battle. He states that “the army of the Greeks was drawn up in order of battle on the declivity of a mountain…because they feared the cavalry” (Anacharsis, Maps 51). While the Greeks resided on this tumulus, the Persian army was spread randomly across the surrounding plain, since “eastern nations usually fought without much regularity” (Anacharsis, Maps 51). The Persian army, consisting of “a hundred thousand foot and ten thousand horse” was also much larger than the Greek army composed of “ten thousand Athenians, and one thousand Plataeans” (Anacharsis, Maps 49). Therefore, each Greek had to kill approximately ten Persians.

Miltiades was the son of Crimon who led the Athenians in the Battle of Marathon (Pausanias). He was first known for having ravaged Scyros in order to avenge the death of Theseus and later, carried his bones back to Athens (Pausanias). He then became a member of the Athenian generals, a board composed of ten men elected on an annual basis as the leaders of Athens in regards to civil and military campaigns. He led this team of generals in devising a tactic that would minimize the Greek soldier’s exposure to the Persian fire archers at the Battle of Marathon (Martin). Before this battle, Miltiades spoke the following to Callimachus in order to obtain his help in rallying the Greek forces: “Athens is on the point of experiencing the greatest of vicissitudes. Ready to become the first power of Greece, or the theatre of the tyranny and fury of Hippias, from you alone, Callimachus, she now awaits her destiny. If we suffer the ardour of the troops to cool, they will shamefully bow beneath the Persian yoke; but if we lead them on in battle, the gods and victory will favour us” (Anacharsis, VII 166). On the day of battle, Miltiades then drew up his forces on the tumulus, a place covered with trees. At this location, the Persian cavalry were unable to act, being “astonished at a mode of attach so novel to both nations” (Anacharsis, VII 167). After numerous hours of battle, the Grecian army’s two wings declared victory, for “the right dispersed the enemy in the plain, while the left drove them back on a morass that has the appearance of a meadow, in which they stuck fast and werelost” (Anacharsis, VII 167).

One year later, Miltiades then led the Athenian expedition against the Greek-inhabited island of Paros, for they were thought to have supported the Persians in their conquests. Even though the fleet did attack the island, they failed to conquer the Persians. Meanwhile, during the attack, Miltiades obtained a serious leg wound that incapacitated him for the rest of his life. Therefore, Miltiades failed in his conquest against Paros, being brought to trial in front of the Athenians because of this failure. Upon arrival back in Athens, he was charged with treason for attacking Paros without clear reason. He was thrown in prison where he died from gangrene resulting from his untreated wound (Herodotus).

Pausanias, a Greek historian who visited the remains of Marathon, states that “the plain is the grave of the Athenians, and upon it are slabs giving the names of the killed according to their tribes” (Pausanias). All across Marathon, he found graves dedicated to Plataeans as well as their slaves since, for the first time in Greek history, slaves fought alongside their masters in battle. Along with these graves, one finds a separate monument to the general Miltiades. Therefore, according to Pausanias, the victims of this battle were so numerous that one still hears “horses neighing and men fighting… at Marathon every night” (Pausanias). Therefore, the Greeks worship those who fell in battle by visiting their graves, naming them as heroes.

The Greeks also were thought to have not fought alone in this battle, claiming that Heracles helped them in this conquest. A man was seen fighting on the Athenian’s side, having “rustic appearance and dress” (Pausanias). This man slaughtered a great number of Persians with a plough and after this battle, was never seen again. Therefore, the Athenians credit this performance to Heracles, being the first city-state to acknowledge this man as a god. They constructed a white marble trophy in his honor.

Pausanias also did not find any graves dedicated to fallen Persians even though the Greeks insisted they buried these deceased invaders. Divine law asserts “that a corpse should be laid under the earth” whether or not the person be friend or foe (Pausanias). However, this historian did not uncover “neither mound nor other trace to be seen, as the dead were carried to a trench and thrown in anyhow” (Pausanias).

In modern culture, the Battle of Marathon is still present in our long-distance running race, named a marathon. Marathons take place all over the world in locations such as Philadelphia, Boston, Chicago, Sydney, Tokyo and France. A current marathon is 26.2 miles, a length corresponding to the distance run by the Athenian messenger named Pheidippides. He ran approximately 26.2 miles from Marathon to Athens in order to tell of the Greek victory as well as advise the Athenians within this city-state to guard themselves against a coming naval attack by the Persian flee. Pheidippides is said to have run the entire distance without stopping, delivering his message to the Athenian people before dying from exhaustion. Therefore, we honor his sacrifice by naming our current day race after him.

Or watch this extremely informative video on Marathon: http://www.youtube.com/watch?v=ZiOwZ6XWyDQ

Barthelemy, J.-J. (Jean-Jacques). Travels of Anacharsis the Younger in Greece: Maps, Plans, Views, and Coins, Illustrative of the Geography and Antiquities of Ancient Greece. London: printed for J. Johnson, 1806.