It has been 2494 years since the Battle of Salamis. As a result, quite a lot has changed. Here are some pictures of what can be found at the site today. 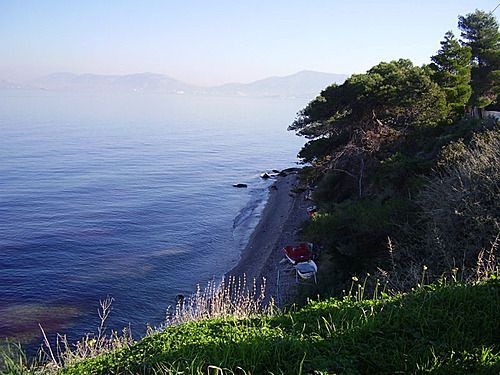 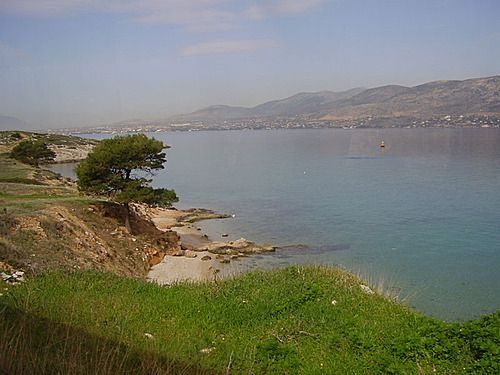 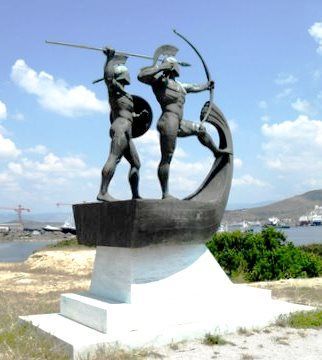 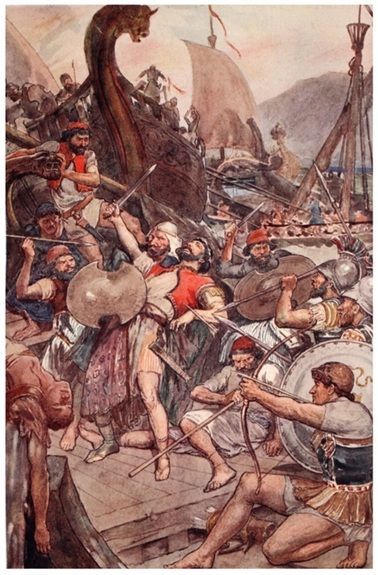 "Death of a Persian Admiral" by William Rainey (1852-1936)
Image from the public domain, Wikimedia Commons. https://commons.wikimedia.org/wiki/File:William_Rainey_-_Death_of_the_Persian_admiral_at_Salamis.jpg

Prelude to the Battle

Themistocles, an Athenian Statesman and General during the Second Persian Invasion, told the Athenians to abandon their city of Athens after the battle of Thermopylae, but some refused and took refuge in the Acropolis (Isocrates, Antidosis). With the burning of Athens, it became increasingly clear that drastic measures must be afforded if the Greeks were to defeat the Persians. The Greek leadership wanted to build a wall and fight a land battle near the Isthmus of Corinth; however, Themistocles decided that a battle should be fought at the straight near Salamis and, according to Anacharsis page 208, and argued with the Greek generals:

“’Here,’ said he (Themistocles), ‘enclosed within a strait, we shall present a front equal to that of the enemy. Further on, the innumerable fleet of the Persians, having room to extend itself, will surround us on all side. By fighting at Salamis, we shall preserve the island in which are our wives and children… and you, Eurybiades, will have to reproach yourself with having drawn the enemy on the coasts of Peloponnesus.’”

Themistocles also said to Eurybiades, “’It now lies with you to choose between the honor of saving Greece, or the disgrace of having caused its ruin’” (Anacharsis 209).  After that, Eurybiades commanded that the Greek ships should stay at Salamis. Themistocles then sent a slave to relay a message to Xerxes that tricked Xerxes into thinking the Greek alliance would crumble, as a result Xerxes sent his ships to search for Greek ships, and they found them at Salamis (Herodotus, Book VIII) 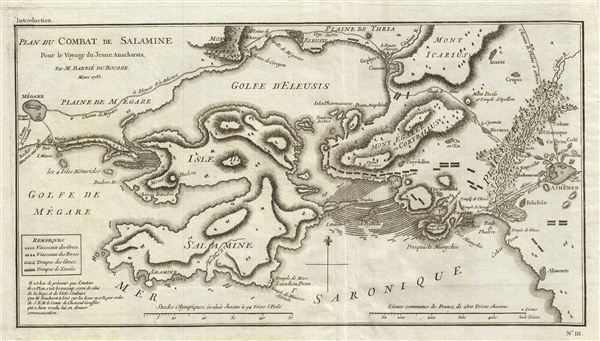 The Persian ships had found the Greeks. Thus, the Corinthian ships feigned retreat back into the strait upon sight of the Persians. The Greek ships surprised the more numerous Persians and rammed them. Persians, with a lack of mobility, could not resist Greek ramming attacks from the Triremes, especially because the Greek ships were smaller and more maneuverable (Molossia). Persians were so numerous it was difficult to maneuver for a retreat, and a strong wind worked against their retreat. Anacharsis on page 214 further describes the battle and remarks on the importance of the Athenian line versus the Phoenician line when it says:

“The fate of the battle depended on the right wing of the Greeks, and the left of the Persians. There were placed the choicest of both fleets. The Phoenicians and Athenians alternately pressed and repulsed each other in the strait. Ariabignes, one of the brothers of Xerxes, conducted the former to battle as if he had been leading them to victory. Themistocles was present everywhere and braved every danger. Whilst he was re-animating or moderating the ardour of his troops, Ariabignes advanced and showered on him, as from the summit of a rampart, a cloud of darts and arrows. At this very instant an Athenian galley rushed with impetuosity on the Phoenician admiral; and the indignant young prince, leaping on board the galley, fell immediately covered with wounds.” 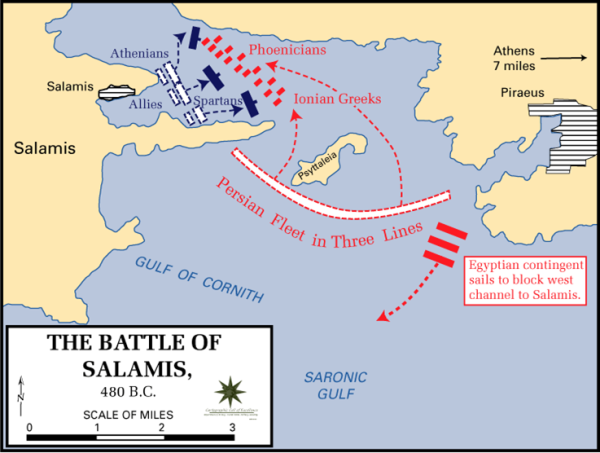 Xerxes wanted to march his army back across the bridge built at the Hellespont (A bridge made of interconnected ships), but ht ultimately decided against it. Instead, Mardonius, a Persian commander, suggested to Xerxes that he leave 300,000 men for Mardonius to command so that the campaign against the Greeks could be continued. Mardonius said to Xerxes,

"Suffer me to propose another method to save their [Phoenecians and Egyptians] glory and your own: I would advise you to lead back the greater part of your troops to Persia , and leave me three hundred thousand men, with whom I shall be able to reduce all of Greece."

The Greeks also erected an offering to the gods for their victory, so they took a Persian trireme and made it a trophy on land in honor of Poseidon. (Herodotus, 8, 121).

Triremes were used at the battle of Salamis. Triremes have three rows of oars. The Persians also had triremes although theirs were larger than those of the Greeks. Triremes have rams near the bow (key to Greek victory at Salamis) 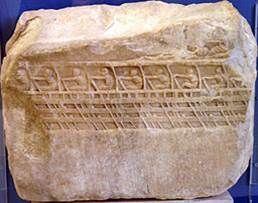 Merriam Webster defines a Trireme as: “Oar-powered warship. Light, fast, and maneuverable, it was the principal naval vessel with which Persia, Phoenicia, and the Greek city-states vied for mastery of the Mediterranean from the Battle of Salamis (480 BC) through the end of the Peloponnesian War (404). The Athenian trireme was about 120 ft (37 m) long, and was rowed by 170 oarsmen seated in three tiers along each side; it could reach speeds of more than 7 knots (8 mph, or 13 kph). Square-rigged sails were used when the ship was not engaged in battle. Armed with a bronze-clad ram, it carried spear-men and bowmen to attack enemy crews. By the late 4th century BC, armed deck soldiers had become so important in naval warfare that it was superseded by heavier ships.”

Triremes had three rows of rowers, totaling 170 men in all. Conditions became very hot in the boats, which made dehydration a real possibility.Galbi remarks that these boats are very agile, and that those who are rowers for these boats must have been very fit, even by today's standards (Galbi, 2007).

Temple of Poseidon at Sounion 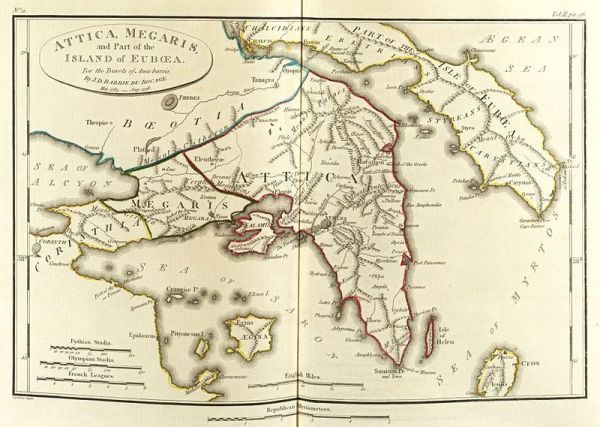 After the Battle of Salamis, circa 440 B.C, the Athenians under Pericles erected the Temple of Poseidon at Sounion. The Athens Key gives a very apt description of the temple:


"The temple of Poseidon was constructed in 444-440 BC, over the ruins of a temple dating from the Archaic Period. It is perched above the sea at a height of almost 60 m. The design of the temple is a typical hexastyle i.e. it had a front portico with 6 columns. Only some columns of the temple stand today, but intact it would have closely resembled the contemporary and well-preserved Temple of Hephaestus beneath the Acropolis, which may have been designed by the same architect. The building was rectangular, with a colonnade on all four sides. The total number of original columns was 42: 15 columns still stand today. The columns are of the Doric Order. They were made of locally-quarried white marble. They were 6.10 m (20 ft) high, with a diameter of 1 m (3.1 ft) at the base and 79 cm (31 inches) at the top. At the center of the temple colonnade would have been the hall of worship (naos), a windowless rectangular room, similar to the partly intact hall at the Temple of Hephaistos. It would have contained, at one end facing the entrance, a colossal, ceiling - height (6m) bronze -probably gold-leafed- statue of Poseidon who was usually portrayed carrying a trident, the weapon he supposedly used to stir up storms. On the longest day of the year, the sun sets exactly in the middle of the caldera of the island of Patroklou, the extinct volcano that lies offshore, suggesting astrological significance for the siting of the temple. The temple of Poseidon was destroyed in 399 by Emperor Arcadius. Archaeological excavations of the site in 1906 uncovered numerous artifacts and inscriptions, most notably a marble kouros
statue and an impressive votive relief, both now in the Greek National Archaeological Museum." 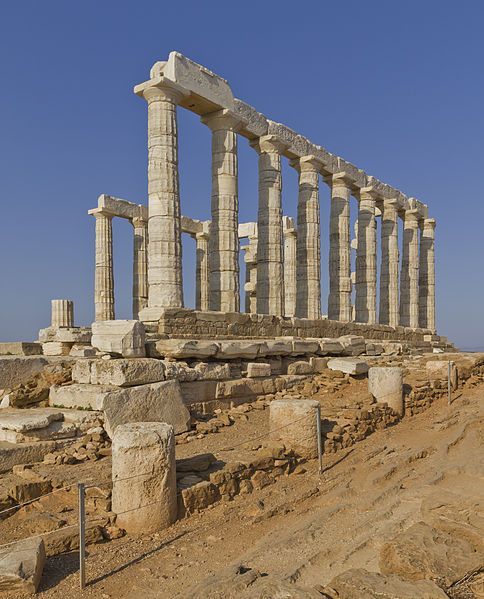 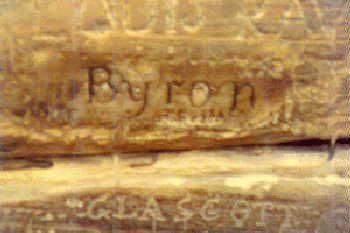 There was a statue found in a shipwreck at Sounion in 1926 AD. This particular statue is thought to represent either Zeus or Poseidon, the two mightiest gods of the Greek Pantheon. The Statue looks as if he could be hurling either a trident or a thunderbolt, and that is why there is a debate as to whom the statue is depicting, because his weapon is missing. The statue is currently located at the National Archaeological Museum, Athens, Greece (Kennedy, Max). This is what the statue looks like: 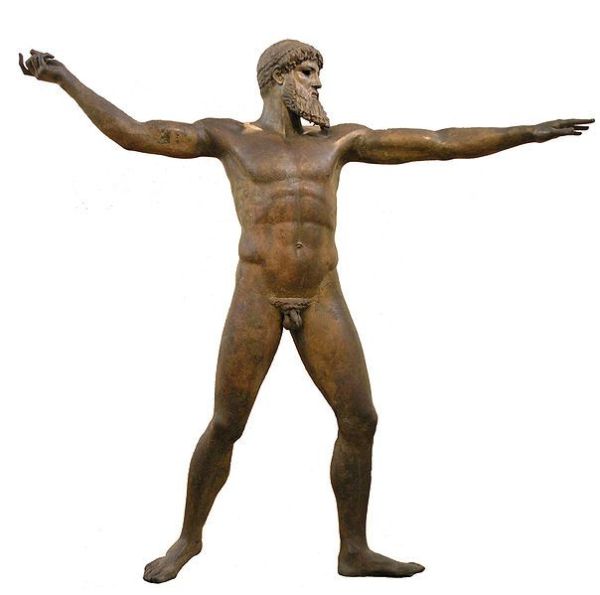