The Temple of Hephaistos

The Temple of Hephaistos and Agora 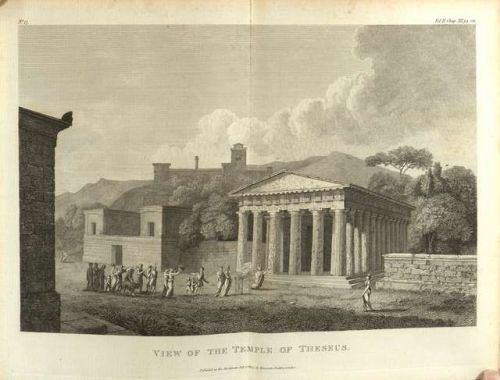 The Agora is the centter of the Anciet City of Athens. It is a large, open square where all kinds of events could occur such as markets, religious ceremonies, athletic competitions, elections, and more. The excavation of the buildings in the Agora have shown how it played important aspects in public life. The Agora contains long stoas, also known as colonnades, which were shaded walkways that citizens often met and socialized underneath. The Agora is known as the location where the idea of democracy was first created and practiced.

Plan of the Agora

Current photos of the Agora as well as a diagram of the plan of hte Agora at the height of its development in ca. AD 150 can be found here

The Agora was the gathering place of Athens, and it served as center for all activities, whether they be social, political, or religious. The Oxford Classical Dictionary defines “Agora” as:

“The Greek term for an area where people gather together, most particularly for the political functions of the polis, normally sited centrally in cities (as at Priene), or at least central to the street lines where the actual centre may be occupied by other features; the area was sacred, and could be treated like atemenos” (Hornblower)

The Agora was valued for its beauty as well as its symbolic meaning, as stressed in Pliny the Younger’s text, Anacharsis,

“Here everything is animate; everything speaks to the eyes of the attentive spectator. The history of the monuments of this people would form the history of their warlike achievements, their gratitude, and religious worship” (Volume II, Page 200)

“Follow me, and, under the shade of the plane-trees that embellish these places, let us take a turn along one side of the square. This spacious enclosure contains a temple in honor of the mother of the gods, and the palace in which the senate assembles. In these edifices, and all around them, are placed cippi and columns, on which are engraven several of the laws of Solon, and the decrees of the people. To that rotunda, surrounded by trees, the prytanes, in rotation of duty, go every day to dine, and sometimes to offer up sacrifices for the prosperity of the people” (Volume II, Page 209-210)

“In the middle of ten statues, which give their names to the tribes of Athens, “the first archon holds his tribunal.” Here the eyes of the enchanted spectator every moment meet the works of genius. In the temple of the mother of the gods you have seen a statue of the goddess, executed but Phidias; “in the temple of Mars, before us, you will find that of the god, the workmanship of Alcamenes, a pupil worthy of Phidias.” (Volume II, Page 210)

“Similar monuments are to be met on every side of the forum. There is the camp of the Scythians, who are paid by the republic to maintain order. There is the place in which people sometimes assemble; but it is now covered with tents, in which different kinds of wares are exposed to sale. Father on you see a crowd which it is almost impossible to pass through. There are sold the provisions necessary for the subsistence of so numerous a people. It is the grand market, divided into several particular ones, frequented at all hours of the day, and especially from nine o’clock till noon. Collectors attend there to receive the duties laid on everything that is sold, and magistrates to superintend what is passing. I shall mention to you two very wise laws, for the regulation of this untraceable and tumultuous populace. The one prohibits any man from reproaching the lowest citizen with living by the profit of his traffic in the market, the government wishing to prevent a useful profession from being treated as an object of contempt.” (Volume II, Page 210-211)

“As the forum is the most frequented part of the city, workmen of all kinds endeavor to reside near it, and houses let there at a higher price than elsewhere” (Volume II, Page 211-212)

Vitruvius also describes the Agora in his book, On Architecture;

“Having laid out in the alley and determined the streets, we have next to treat of the choices of building sites for temples, the forum, and all other public places, with a view to general convenience and utility. If the city is on the sea, we should choose ground close to the harbor as the place where the forum is to be built; but if inland, in the middle of the town” (Pollio, Chapter VII, 1)

About & References in Classical Literature

The Temple of Hephaistos is located on top of Agoraios Kolonos hill, to the west of the Agora of Athens. It was built between 460 and 420 BC, and it is dedicated to the god of metallurgy, Hephaistos, and the goddess of war, Athena (Tsoga).  It is also known as the “Theseion”, and holds the only cult image of Hephaistos in Athens (Stewart). Pausanias describes the Theseion in his Description of Greece,

“Above the Kerameikos and the so-called Royal Stoa is a temple of Hephaistos. I was not surprised that a statue of Athena stands beside him because I knew the story about Erichthonios. But when I saw that the image of Athena had blue eyes I found out that the legend about them is Libyan. For they have a saying that she is the daughter of Poseidon and Lake Tritonis, and so has blue eyes like Poseidon” (Pausanias 1.14.6)

“Hard by the gymnasium is the sanctuary of Theseus, where are pictures of Athenians fighting Amazons. This war they have also represented on the shield of their Athena and upon the pedestal of the Olympian Zeus. In the sanctuary of Theseus is also a painting of the battle between the Centaurs and the Lapithae.” (Attica, XVII. 1-4) [3]

Architecture of the Temple of Hephaistos

The Temple of Hephaistos is comprised of a pronaos (anteroom), opisthodomos (back section), and an antis containing two columns. The exterior of the temple is decorated with a Doris colonnade, with six columns wide and thirteen columns on the length. The stone base of the temple is called the crepis, and the marble that comprises the area between the crepis to the roof was produced in the quarries of Pendell mountain, Attica. The architectural sculptures from the temple were produced in the quarries on the island of Paros. On the interior of the cella at the far end there is a pedestal that supports the bronze ceremonial statues of Hephaestus and Athena by the sculptor Alkamenis, claimed by Pausanias to have been made between 421-415 BC.

The sides of the external colonnade are decorated with metopes.On the East side, there are ten metopes that are visible from the Agora which depict nine of the labors of Herakles.The North and South sides depict four of the feats of Theseus, from which the name "Theseion" is derived. The frieze across the pronaos shows the victorious struggles of Theseus against the fifty sons of Pallas (claimers of the throne), with the six gods who participated in the fight. The opisthodomos and West pediment depict the fight of the Centaurs, while the East pediment depicts the reception of Herakles on Mount Olympus, or the birth of the goddess Athena.

Later History of the Temple of Hephaistos

In the 7th century AD, the Temple of Hephaistos was converted into a church dedicated to St. George Akamas. The temple was in use until the liberation of Greece from the Turkish occupation. The temple was then used as an archaeological museum until the American School for Classical Studies in Athens started excavations in 1931.

Photos of the current excavation of the Temple of Hephaistos can be found here:
http://odysseus.culture.gr/h/2/eh2560.jsp?obj_id=6621