The Temple of Hephaistos and Agora 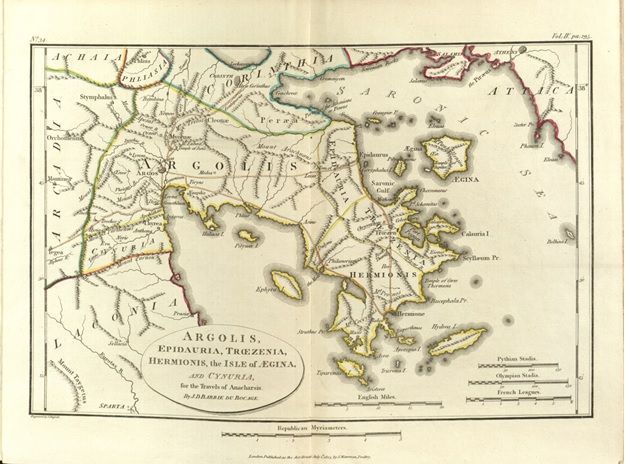 The tales of Anacharsis describe him attending the theatre with Philotas.  He described his experience in a very passionate and honest way, accompanied with a diagram of a theatre.  He described his experience as he approached the theatre: “Nothing can be imagined more grand and striking than the first view.  On one side we see the stage, ornamented with scenes executed by the ablest artist; and on the other, a vast amphitheatre, lined with seats rising one above the other to a very great height; with landing-places and stairs, which lengthened out, and intersecting each other at intervals, facilitate the communication, and divide the seats into several compartments, some of which are reserved for particular communities and classes of citizens.”1 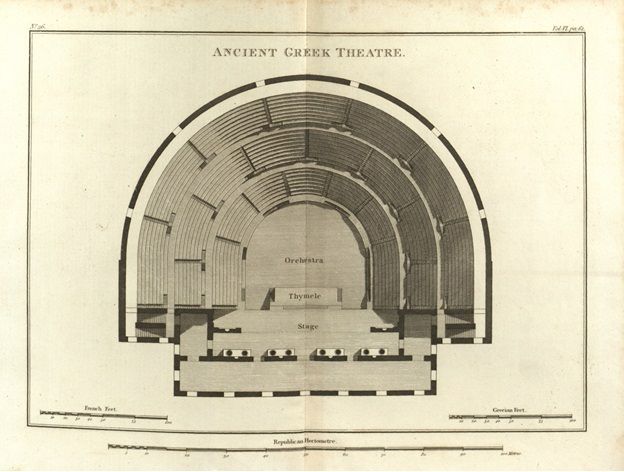 At this time, theatres were often built into hillsides in order to make use of the slope.  Vitruvius said of the structure of theatres: “The foundation walls will be an easier matter if they are on a hillside; but if they have to be laid on a plain or in a marshy place, solidity must be assured.”2   Rows of seating were ascending and this strategy in design was effective.  Theatres were also called al fresco theatres because there were outside in the open air.  Theatres could see tens of thousands of spectators.  The Theatre of Dionysos, Eleuthereus on the south side of the Acropolis matches a lot of Anacharsis’s description.

Spectators entered from passageways called paradoi.  They then sat on planks that acted as bleachers called “ikria”.  The ikria was supported by wooden scaffolding that could be easily put up or taken down in the early fifth century.  According to Vitruvius, the ikria collapsed in 498 BC and killed a number of spectators.  The ikria circled around the flat circular area, called the orchestra.  The orchestra was the circular area where special performances took place.  It could be seen by all of the spectators and it was closer to the audience than the regular stage.  Dramas, tragedies, poetry, music, and dancing all occurred on the stage,  but chorus members sometimes came out and performed or danced in the orchestra area.  Another major part of the theatre was the skene.  This was a wooden scene building built behind orchestra for the purpose showing scenery and improving acoustics. It had wings on both sides that may have had stairways or movable scenery, dressing rooms, and provided storage for props.

Sometimes orchestras were delineated by clearly drawn circles on the ground, such as the case of the Theatre at Epidauros, which was about a half a mile away from the Sanctuary of Asklepios.  It was also built into a hillside in order to utilize the slope and save costs.  However, here is the first time we see stone seating and symmetrical seating.

The stairs separated the rows and the upper section and lower section were divided by a special row that allowed for people to more easily maneuver before and after the performance.  There were a number of different entrances that were built in continuous straight lines.  Vitruvius said “The different entrances ought to be numerous and spacious, the upper not connected with the lower, but built in a continuous straight line from all parts of the house, without turnings, so that the people may not be crowded together when let out from shows, but may have separate exits from all parts without obstructions.”3   This may be another function of the officers present at the theatre.  Anacharsis was told the number of attendees at the theatre was about thirty thousand.  The theatre of Dionysos, Eleuthereus seated about 17,000 and the Theatre at Epidauros seated about 12,000.  In addition, many of these theatres were associated with the cult of Dionysos.  Competitions were often held in Dionysos’s honor.  Anacharsis may have been describing one of these festivals.

A smaller theatre from the 4th century BC was the Theatre at Delphi.  It had about 35 rows and could seat about 5,000 spectators.  This theatre was also built into a hillside, but gave a particularly expansive view of the valley below.  This theatre seating was originally built with wood but was then eventually replaced with stone seating. 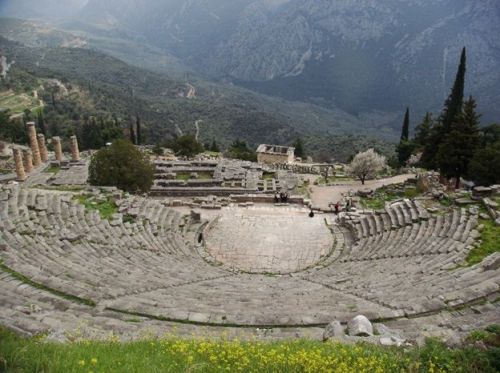 A somewhat different seating design was shown at the Theatre at Delos.  A diazomata divides the upper and lower sections of seating, similar to the design at Epidauros, but the upper section is not as wide as the lower section.  It had about 43 rows and seated 5,500 spectators.  It also seems to have a smaller orchestra than some other theatres as the full circle is not open.

The Theater at Priene also presents a unique design.  It is devoid of an upper section.  However, it has the largest orchestra seen during this time with a diameter of about 61 feet.  The stage also had two stories, which was a new concept.  Performances held on the second level were generally more authoritative or commanding excerpts.

According to Anacharsis, officers attended the theatre in order to maintain order in the crowds.  He also described others in attendance.  He mentioned chief magistrates, members of the courts of justice and members of the senate, and even ministers.  The other members of the audience were primarily young men over the age of eighteen.  Some women attended as well, but were seated in a separate section away from the men.  Anacharsis also said that slaves were present who held purple carpets and cushions and fetched food and wine for their masters.
With regards to the actual performances themselves, Anacharsis reminds the reader that only men were permitted to act, and some men played the female characters.  Anacharsis attended a special festival in which competitions of dramatic pieces were held.  In these competitions, dramatists like Aeschylus, Sophacles, Euripides, Aristophanes, and Menander competed.  People come from all over Greece to see these competitions.  In addition, Anacharsis described his emotional experience while watching the tragedy, Antigone.  Emotion was an essential part of attending the theatre.  People went to the theatre to escape their lives and to watch someone’s more interesting story.  Anacharsis said “Almost all these tragic events passed as it were before my eyes, or rather a happy distance mitigated their horror…What a marvelous combination of illusions and realities!  I flew to the aid of the two lovers; I detested the remorseless author of their sorrows.-The most violent passions rent my soul, without tormenting it; and for the first time I found charms even in hatred.  Thirty thousand spectators, melting into tears, redoubled my emotion and delirium.”4   Here Anacharsis describes the audience’s collective emotional experience.  Vitruvius described it in a similar way: For when plays are given, the spectators, with their wives and children, sit through them spell-bound, and their bodies, motionless from enjoyment, have the pores open, into which blowing winds find their way.”5   People became very invested in the performances, whether they were tragedies or comedies.  Attending the theatre was normally a thrilling outing and a spectacular event for citizens of Greece.