The Workshop of Pheidias

The Gymnasium at the sanctuary, a large area surrounded by Doric order colonnades, was used by runners and pentathlon athletes for training immediately preceding the Olympic Games. The Palaestra is a 66 meter square building that is a part of the Gymanisum that was predominantly used for the training of boxers and wrestlers.

The Roman author and architect Vitruvius offers this description of the Palaestra (from here) in his Ten Books of Architecture, translated by Morris Hicky Morgan:

"Next, although the building of palaestrae is not usual in Italy, I think it best to set forth the traditional way, and to show how they are constructed among the Greeks. The square or[160] oblong peristyle in a palaestra should be so formed that the circuit of it makes a walk of two stadia, a distance which the Greeks call the δἱανλος. Let three of its colonnades be single, but let the fourth, which is on the south side, be double, so that when there is bad weather accompanied by wind, the drops of rain may not be able to reach the interior. 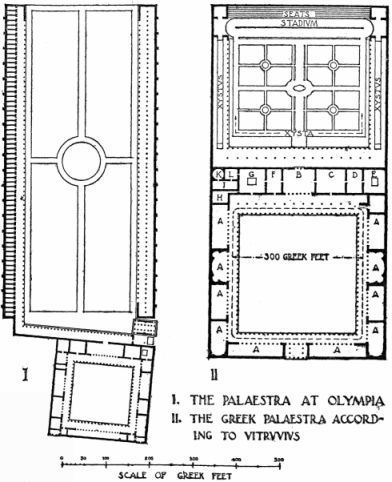 Site plan of the Palaestra, also showing the Gymnasium (attached lower square on the left), according to Vitruvius. From: Ten Books of Architecture by Vitruvius. Image from the public domain, Project Gutenberg. http://www.gutenberg.org/ebooks/20239

In the three colonnades construct roomy recesses (A) with seats in them, where philosophers, rhetoricians, and others who delight in learning may sit and converse. In the double colonnade let the rooms be arranged thus: the young men's hall (B) in the middle; this is a very spacious recess (exedra) with seats in it, and it should be one third longer than it is broad. At the right, the bag room (C); then next, the dust room (D); beyond the dust room, at the corner of the colonnade, the cold washing room (E), which the Greeks call λουτρὁν. At the left of the young men's hall is the anointing room (F); then, next to the anointing room, the cold bath room (G), and beyond that a passage into the furnace room (H) at the corner of the colonnade. Next, but inside and on a line with the cold bath room, put the vaulted sweating bath (I), its length twice its breadth, and having at the ends on one side a Laconicum (K), proportioned in the same manner as above described, and opposite the Laconicum the warm washing room (L). Inside a palaestra, the peristyle ought to be laid out as described above.

But on the outside, let three colonnades be arranged, one as you leave the peristyle and two at the right and left, with running-tracks in them. That one of them which faces the north should be a double colonnade of very ample breadth, while the other should be single, and so constructed that on the sides next the walls and the side along the columns it may have edges, serving as paths, of not less than ten feet, with the space between them sunken, so that steps are necessary in going down from the edges a foot and a half to the plane, which plane should be not less than twelve feet wide. Thus people walking round on the edges will not be interfered with by the anointed who are exercising.

This kind of colonnade is called among the Greeks ξυστὁς, because athletes during the winter season exercise in covered running tracks. Next to this "xystus" and to the double colonnade should be laid out the uncovered walks which the Greeks term παραδρομἱδες and our people "xysta," into which, in fair weather during the winter, the athletes come out from the "xystus" for exercise. The "xysta" ought to be so constructed that there may be plantations between the two colonnades, or groves[162] of plane trees, with walks laid out in them among the trees and resting places there, made of "opus signinum." Behind the "xystus" a stadium, so designed that great numbers of people may have plenty of room to look on at the contests between the athletes." 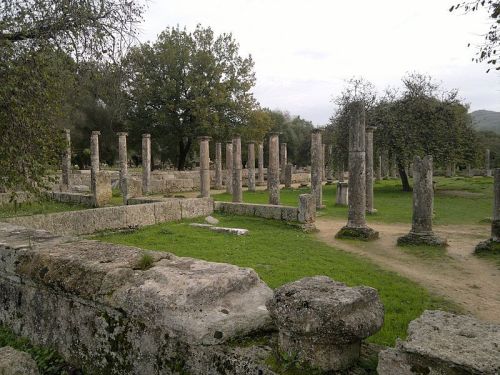 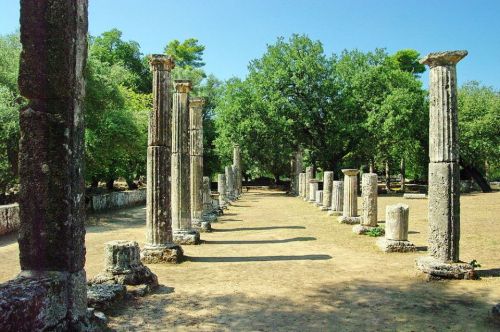