The Archaeological Site of Olympia

The Workshop of Pheidias

A sanctuary of ancient Greece nestled next to Mount Koros in a valley on the Peloponnese peninsula, Olympia is best known, as its name might suggest, as being the site of the Olympic Games in classical times.

In the 10th century B.C., Olympia became a center of worship for Zeus, the mighty Greek god of the sky and thunder. The first Olympic Games took place in 776 B.C., and were held every four years from then until 393 C.E., when they were abolished by Emperor Theodosius. These Games, much like those of today, were momentous occasions, allowing athletes the opportunity to impress the citizens with their talents.

The archaeological site of Olympia was designated a United Nations Educational, Scientific, and Cultural Organization (UNESCO) World Heritage Site in 1989, and has incredible cultural and historical significance.

A modern day map of Greece is below. Olympia is located in West Greece, in the region known as Elis. It is a panhellenic sanctuary dedicated to Zeus. 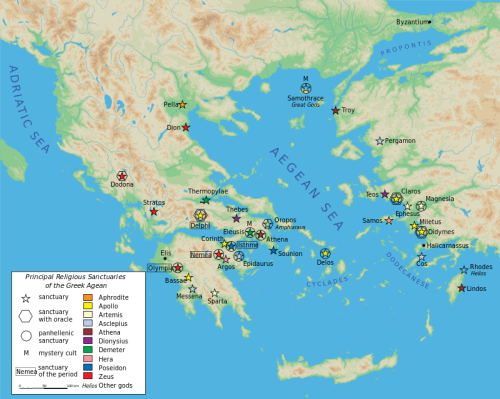 The sanctuary of Olympia features dozens of important landmarks, many of which can still be viewed today. A selection of these has been picked to be explored in more detail on this site:

In the above pages, you'll find more information (including pictures and quotes by ancient Greek travelers and historians!) about these locations.