Dime novels were early paperback books, sold inexpensively (usually, as the name suggests, for ten cents or less) and featuring subjects designed to appeal to a wide audience.  The earliest dime novels were primarily tales of adventure and romance dealing with the American frontier, historical events like the Revolutionary War, and life at sea.  As the form developed, additional subgenres became popular: tales of life in the city, stories of boys having remarkable adventures, sports stories, detective fiction, proto-science fiction, and perhaps the most popular of all – the Western tale of cowboys and Indians.  The books were usually published in numbered series that were updated frequently (often a new title every week), and most had illustrated covers (sometimes in color) highlighting some of the action found within.

The prototypical American dime novel can be traced back to the publisher Irwin P. Beadle & Co. (later Beadle & Adams), which published Malaeska: The Indian Wife of the White Hunter in 1860 as the first title in a series called Beadle’s Dime Novels.  While Malaeska itself (a reprint of an 1839 story from The Ladies' Companion) differed significantly in tone and content from most of the dime novels that followed, it established a physical format that would endure for some time.

The Beadle books eventually sold millions of copies and soon inspired countless imitators.  What began as an experiment became a flourishing publishing market for the remainder of the nineteenth century.

The full history of the Beadle books is complex, and a great deal of misinformation can be found (at least in part due to conflicting accounts of which Beadle brother deserves credit for inventing the dime novel concept).  Those interested in learning more can find the most accurate and comprehensive account of the firm in Albert Johannsen's The House of Beadle and Adams.

The earliest dime novels were small booklets, around four by six inches and a hundred pages in length, but it didn't take long for publishers to begin experimenting with other formats.

Toward the end of the dime novels' reign, another variant form rose in popularity: paper-covered volumes more closely resembling today’s paperback novels, often referred to by collectors as “thickbooks” because of their greater page count relative to the early releases.  While original dime novels were published in this format, it was also heavily used for reprints.  For example, the popular Frank Merriwell series of thickbooks was created by editing together stories originally serialized in the Tip Top Weekly nickel library.

Dime novels were not a phenomenon unique to the United States.  American dime novels were exported to other English-speaking markets and translated into other languages.  Translations of the Nick Carter books, for example, got enough attention in Sweden to be banned as part of an anti-Smuttslitteraturen campaign in the early 20th century.[1]  The flow of stories worked in both directions, and foreign works (such as adventures drawn from the penny dreadfuls) made their way into American dime novels.  The British market was particularly fruitful, introducing titles like the Jack Harkaway adventures which became popular back in America. 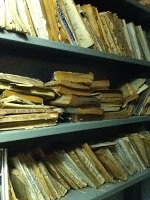 Dime novels were designed to be disposable.  Printed on the cheapest available materials, they were not really intended to last for centuries – after all, the publishers wanted to sell new titles every week.  As a result, of the millions of books printed, few remain, and those that do are often in fragile condition due to the acid-heavy paper used in their production.  Most of the large collections that remain still exist thanks to the efforts of private collectors like Dr. Frank P. O’Brien and George Hess, whose collections are now housed in the New York Public Library and the University of Minnesota, respectively.[2]  Other survivals can be credited to colorful Library of Congress rare book curator, V. Valta Parma, who rescued many titles from an uncertain fate in the Copyright Office and whose secret identity is revealed in an interesting article by Clark Evans.[3]

Fortunately, since all of the dime novels are old enough to be out of copyright protection, they are an excellent candidate for digital preservation, and several projects exist to scan these rare titles before they are completely lost to history.