The Battle of Plataea

In his Histories, Herodotus discusses that the Persians adopted many foreign customs, including their dress. He states “they have taken the dress of the Medes, considering it superior to their own; and in war they wear the Egyptian breastplate. As soon as they hear of any luxury, they instantly make it their own” (Herodotus, 135). This dress consisted of a modification of the Near Eastern pleated dress. The Persians wore styles of draped clothing consisting of pleated skirts and tunics. To this, they added a headband or a tall, fluted hat. Therefore, Herodotus refers to this as the “Persian costume” or dress. 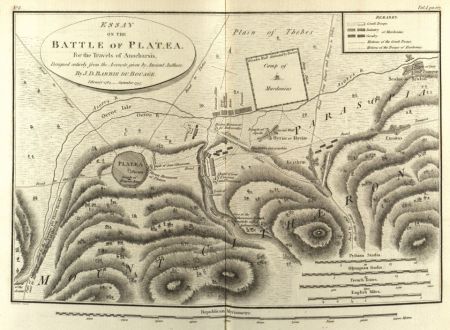 The Battle at Plataea was another battle fought between the Athenians and Persians around 479 B.C.E., after the defeat of the Persians at the Battle of Marathon. The Persians still desired to take over Greece and therefore, sent the following proposition to the Greek city-states: the Greeks were to give up their home and in return, the Persians would grant them with a new land. Therefore, according to Herodotus, the following conversation ensured between the city-states: “the king of the Medes offers to give us back our country, and wishes to conclude an alliance with us on fair and equal terms, without fraud or deceit. He is willing likewise to bestow on us another country besides our own, and bids us choose any land that we like. But we, because we reverenced Hellenic Jupiter, and thought it a shameful act to betray Greece, instead of consenting to these terms, refused them” (Herodotus). Therefore, the Greeks refused to accept the Persian’s offer, deciding to defend their territory once again.

The Greeks gathered near Plataea, being a suitable region to set up camp due to the plentiful supply of water. At this location, the Greeks “drew themselves up, nation by nation, close by the fountain Gargaphia, and the sacred precinct of the Hero Androcrates, partly along some hillocks of no great height, and partly upon the level of the plain” (Herodotus). Men had arrived for battle from a variety of city-states including Plataea, Cephallenia, Corinth and Leucadia while the greatest number came from Athens. In total, the Greek army, including all those with light and heavy armor, included approximately one hundred and ten thousand men (Herodotus). The Persians, led by a general named Mardonius, traveled towards the Plataean territory upon learning that the Greek forces were encamped here. However, Mardonius had an insufficient number of troops to fight against the united Greek city-states who were led by Pausanias.

After a ten-day hiatus, the battle began on a plain north of Plataea. According to Anacharsis, the Battle of Plataea began “on the third of the month Boëdromion, in the second year of the seventy-fifth Olympiad” (Anacharsis, VI 242). On that same day, the Greek fleet had conquered a Persian force by sea. During the course of the Battle of Plataea, both armies feared crossing the river, which would break their formation. A break in formation would then make them vulnerable to their opponent. Therefore, the Greeks decided to lure the Persians towards the mountains, where their cavalry could be used to overcome the Persian forces. However, Mardonius refused to follow this course of action, causing the Greeks to eventually advance towards the river. At the river, the Greeks were attacked by an onslaught of Persian arrows, causing them to retreat. Upon their retreat, the Persians crossed the river, having thought the battle was over. However, the Spartan phalanx laid on the opposite side, in hiding. This superior force then defeated the Persians while the Athenians ended the battle by capturing the Persian camp. Therefore, the Greek city-states conquered their invaders once again (Herodotus).

Greek Hoplites- their weapons and armor

During the Battle of Plataea, the Greek army consisted mostly of hoplites, the name for heavily armed foot soldiers.  These soldiers were prevalent within Greek forces between the 7th to 4th centuries B.C.E. (Cartwright). The hoplite forces consisted of ordinary male citizens belonging to any one of the Greek city-states. If a man was physically able to fight, he was expected to equip himself with the necessary means, making himself available to be apart of the army.

Athens created a “compulsory military service for 18-20 year olds, but during a war all male citizens up to the age of 60 could be called up to the armed forces” (Cartwright). Many of the other city-states followed Athen’s lead by instilling their own form of required military service. However, since the hoplites lacked military training, many city-states created a smaller, professional military unit known as the epilektoi. The most famous epilektoi formed was the Sacred Band of Thebes, comprised of “150 pairs of male lovers who swore to defend their partner to the death” (Cartwright).

Although the hoplites used a variety of tools, the “principal weapons of a hoplite infantryman were a long ash wood spear (doru) and a short sword (xiphos)” (Cartwright). The doru, measuring approximately 8 feet in length, was fitted with a blade of bronze or iron on its tip as well as a spike on all four sides named a sauroter. The xiphos consisted of a straight or slightly curved iron blade extending to around 60 cm in length. As well as carrying these primary weapons, some of the infantry also stored a dagger on their person in case something happened to their spear or sword. Though these weapons provided a means for fighting, the hoplites needed protection for their skin during warfare. Therefore, Cartwright states “protection was provided by a leather-lined bronze helmet which could vary in design, was often crested, and protected the head, neck, and face” (Cartwright). Also, the infantry wore a leather breastplate and guards around their shins as well as arms. For guarding against a Persian strike, the hoplite “carried a large circular shield (hoplon or aspis) some 80 cm (30 in.) in diameter and weighing as much as 8 kg” (Cartwright). This wood shield was worn around the left arm by placing this appendage through a central band while gripping a strap for additional support.

Interestingly, many of these shields carried bronze designs. One of the most popular figures embroidered on a shield was a gorgon. The Greek soldiers thought this mythical creature would aid them in defeating their enemy. Since the gorgon is known for having turned its enemies into stone, the Greeks hoped to turn their enemy “into stone”.

Therefore, when a hoplite was fully armored, he carried about 20 kg of equipment. Being able to hold this equipment required physical training of the hoplites. Since “all of this equipment amounted to quite an investment, being a hoplite also indicated that the individual had a certain status in wider Greek society” (Cartwright).

Whereas the Greeks favored close combat due to their weapons, the Persians preferred long-range assault due to their archers as well as their cavalry charge. For their weapons, the Persians typically “carried a lightweight wicker shield and were armed with a long dagger or battleaxe, a short spear, and composite bow” (Cartwright). Similar to the Greek’s epilektoi, the Persians also had an elite fighting force named the Immortals. The Immortals, composed of Egyptian marines as well as Thebans, had armor superior to the protection worn by a typical foot soldier. The Persian cavalry also carried weapons in the form of bow and arrows and javelins for throwing at the enemy. This cavalry normally fought on the outskirts of the battle, destroying the remaining opposing force after the archers. Though the Persians had the upper hand in many battles against the Greeks, the Battle of Plataea as well as the Battle of Marathon proved that they were not invincible.

Even though the Persians had more long-range weapons, some of these weapons could not stop the Greek forces. For example, even though the Persians fired weapons rapidly into the enemy forces, these arrows were unable to penetrate the hoplite’s bronze shields. Being mainly unaffected by these weapons, the Greeks then charged the Persian forces in order to gain the advantage in hand-to-hand combat. When at close quarters, “the longer spears, heavier swords, better armour, and rigid discipline of the phalanx formation meant that the Greek hoplites would have all of the advantages on broken terrain” (Cartwright).

For additional information on the Battle of Plataea, please refer to this video: https://www.youtube.com/watch?v=pkQe8efbYDM