The Battle of Thermopylae

The Battle of Thermopylae has been recreated in various mediums throughout the centuries, most recently in the movie 300.

The Battle of Thermopylae shares remarkable similarities with a battle described by Sallust in his text, Bellum Catilinae, a text about the trial of Catiline, a Roman traitor who waged civil war on the republic. Geographically, the Romans decided on a location that had "a plain stretched between the mountains on the left, with a rugged rock on the right," almost identical to historical descriptions of Thermopylae (Perseus Digital Library). Both the Roman and Greek generals were able to capitalize on the small resources they had available and used their location strategically, bringing all their soldiers into a small area to start a concentrated offensive.  However, this military strategy was risky and, ultimately, cost many men their lives. It is clear that valor was equally as important to the Romans as it was to the Greeks as seen by Sallust's description of how the soldiers fought bravely, "all with wounds in front" and "yielding up his breath, covered with his corpse the spot which he had occupied when alive" (Perseus Digital Library). One final, unfortunate similarity is that there were no survivors in either battle.  However, by waging war courageously and standing their ground, the Romans and Greeks gained "virtus (virtue)" and 'κλεος (honor),' the greatest rewards one could hope to attain. 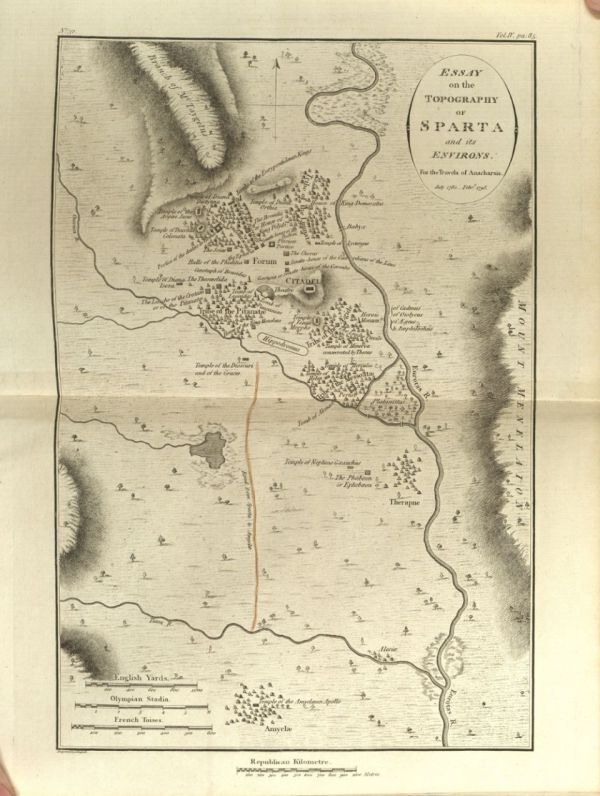 During the early fifth century, the Persian Empire had locked its eyes on Greece.  The Persian Wars lasted from 492 BCE until 479, and, ultimately, ended with a decisive Persian defeat at Platea[1] .  Over this 13 year period, each side experienced major victories and setbacks; the Persians were defeated at Marathon, Salamis, and Platea and the Greeks at Thermopylae.  The Battle of Thermopylae demonstrated the Greeks’  “ambition of glory, the love of their country, all the virtues were carrier to their highest elevation, and the minds of men exalted to a degree hitherto unknown," despite ending in Greek defeat[2].

Geographically, Thermopylae is located approximately 150 kilometers from Athens and is surrounded by steep mountains on one side and swampy land on the other; “these places, then, were thought by the Greeks to suit their purpose[3]” (Herodotus, 7.177).  However, the overwhelming number of troops that Xerxes had at his disposal—estimated at around 80,000—made it nearly impossible for the Greeks to stage any viable fight[4].   They did not retreat or accept Xerxes’ offers to surrender, rather the Greeks, led by Leonidas, stood poised to fight[5].  Despite this certain defeat, “the ambition of glory, the love of their country, all the virtues were carried to their highest elevation, and the minds of men exalted to a degree hitherto unknown” [6]. 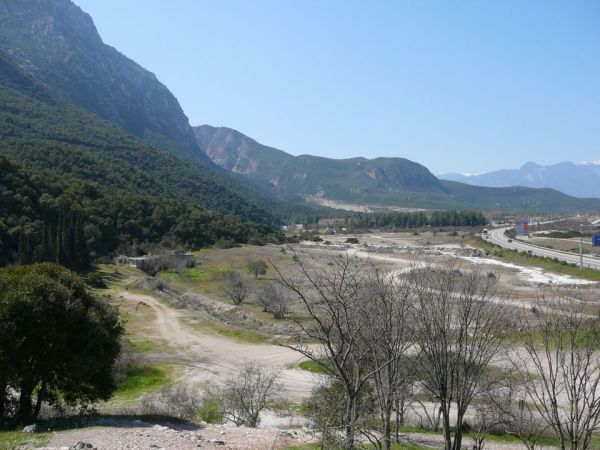 At the same time that the Greek army was preparing to guard the pass at Thermopylae, the Greek fleet prepared to meet the Persians at Artemisium, “where the wide Thracian sea contracts until the passage…is but narrow” [7].  Simultaneously, the Greek army set off to Thermopylae.  According to Anacharsis, the Greek fleet consisted of 240 ships and was led by Eurybiades, a Spartan; this is particularly noteworthy because the Athenians made up an overwhelming portion of the fleet and were known for their naval abilities, whereas the Spartans contributed 10 ships and were more known for their land fighting[8].  Despite losing approximately 400 ships due to bad weather, the Persian fleet still grossly outnumbered that of the Greeks[9].  The battle raged for two days, and, similarly to the Persians’ strategy at Thermopylae, they attempted to surround the Greek fleet, which proved to be mightier than Xerxes could have anticipated[10]. Both sides suffered heavy losses in the fighting that ensued, but with the help of bad weather, the Greeks destroyed 200 Persian ships[11].  One incredible display of bravery that Herodotus recounts tells about Pytheas son of Ischenous who “would not stop fighting until he had been entirely hacked to mincemeat”[12].  His courage was so well respected that even the enemy “took great pains to keep him alive for his valor, tending his wounds with ointments…and treated him with kindness”[13]. However, due to the considerable damage to the Greek fleet and the disastrous situation developing at Thermopylae, the Greeks were forced to retreat to Salamis, where they eventually defeated the Persians[14].

However, "Farther on, the traveller crosses a current of hot water, whence this palce has acquired the name of Thermopylae," the land front of this offensive[15].  There, the, the Greeks were preparing to make a major stand against the Persians at the Valley of Tempe near Mount Olympos, but the size of the Persian army forced them to retreat .   After reorganizing, the Greek army consisted of approximately 6,000-7,000 soldiers; due to disputes amongst the poleis, the sacred games in Olympia, and the Spartan religious festival, Karneia, the actual size of their force was smaller[16].   As a result, the Spartans, who were considered to have the best army in the Peloponnese, only contributed 300 hoplites, significantly fewer soldiers than the other city-states.  However, “the one most admired and the leader of the whole army was a Lacedaemonian, Leonidas”[17].

Leonidas’ conviction and foolhardiness steeled the Greek force to protect the mountain.  Defending the narrow path, the Greeks were able to counter the Persian offensive using their phalanx organization. On the second day of fighting, the Greeks maintained their strong hold until Ephialtes, a local farmer, gave information to Xerxes about another path, the Anopaia path, which would enable the Persians to bypass the Greek troops and infiltrate behind the Greeks’ formation[18]. In order to avoid securing certain death for his men, Leonidas ordered the Greeks to retreat.  Leonidas organized one final effort with 300 Spartans to defend the pass; this battle ultimately proved fatal for him[19].  As a testament of their love for their leader, the men fought for Leonidas’ body. Their only recourse was to retreat, regroup, and start planning another offensive.  “The death of Leonidas and his companion produced a greater effect than the most brilliant victory,” as emphasized by the glorified accounts and portrayals of the 300 Spartans that are still retold today[20]. 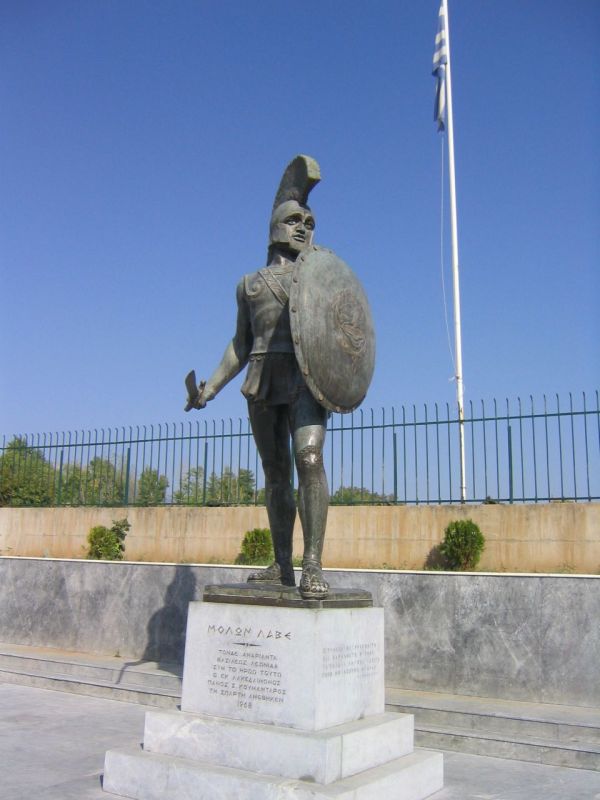 Both the battles at Artemisium and Thermopylae were characterized by Spartan heroism.  Herodotus recounted a conversation between Xerxes and one of his advisers about the Spartans: “Rest assured that if you overcome these men and those remaining behind at Sparta, there is no one else on earth who will raise his hands to withstand you”[21].  Rumored to be founded by Lacedaemon, a son of Zeus, Sparta had been respected for its military power since the time of the Trojan War[22].  Spartan society had always been rigidly structured around its military, with military training being incorporated into all aspects of life from birth to death.  “Lacedaemon prides herself in the death of her warriors;” there is even a story that says Spartan wives and mothers would go examine the bodies of their loved ones after battle to ensure that their injuries were frontal wounds, indicative of brave fighting.   By conscripting all captured peoples into their army and training Spartan boys in military arts, the Spartans developed a large, skilled army of hoplites (foot-soldiers)[23].  These hoplites carried shields and swords or short spears, in contrast to the Persian army that favored long-distance attacks[24].