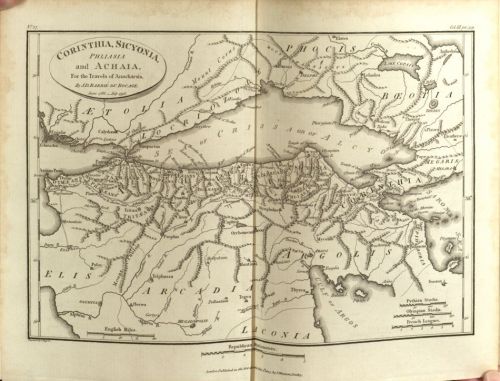 Anacharsis evidence
"More solemn competitions were instituted in favour of painting and music, at Delphi, Corinth, Athens, and other places. The Grecian cities which had known only the rivalry of arms, now became acquainted with that of talents...Athens, which surpassed them all in magnificence." (344)

Talents were abundant in Ancient Corinth. Particularly, as Anacharsis so poetically put it, they were able to defend themselves with ease and efficiency, but they also had great talents to be explored in the arts, craftmanship, and even literature, from philosophy to epic poetry.

"On coming out of the Corinthian treasury, we continued to run over the monuments of the sacred precinct...Apollo & Hercules...Latona & Diana...Minerva...These five statues, execusted by three artists of Corinth, were constructed in this place by the Phocians." (386)

The deities play a huge role in the success of Corinth as a city of wonder and splendor. Art and devotion in Corinth was largely cultural and concentrated heavily among the Corinthian people, all of varied trades and crafts.

Politically Active
"Philip even restored to them the Isle of Samos, which he had taken some time before. He only required that they should send deputies to the congress which he was about to convene in Corinth, to deliberate on the general interests of Greece." (96)

Congress convening in Corinth was nothing new for the time. As a politically active city, it hosted many a forum and discussion, each with nobles and dignitaries spanning the empire far and wide.

Cultural Hub & Center
"From thence, returning to Corinth, we once more took the road to Athens, where, when I arrived, I continued my researches into the different parts of the administration, the opinions of the philosophers, and the various branches of literature." (327)

Corinth was on a major road that passed straight into Athens. Corinth had it all, from the arts to sciences, and from major works of literature to big names in government and state.

Anacharsis' perspective...
"On every side the eye reposed on rich and various landscapes. Besides a view of the different parts of the city and its environs, the prospect extended beyond them as far as the mountains of Salamis, Corinth, and even of Arcadia." (60)

The view from Corinth, back in day and even today, is both stunning and breathtaking. The mountains and the mountaintop view gives a pristine glimpse of the historical place, that has been inhabited by folks for millennia